They say a family that eats together stays together. We ate together, stayed together and got sick together. We got sick with Covid-19. Together. It was my family’s worst nightmare. 11 out of 17 members of my family tested positive for Covid-19, all in a span of 5 days.
We are a semi-joint family, consisting of 17 members of 4 generations, with ages ranging from 3 months to 90 years and staying across 3 floors in the same building. We were all locked in the house during the national lockdown. We followed the strictest possible rules of the lockdown. We barely left the house. We sanitized our building every day. We sanitized all the essential items bought once a week by a family member for the entire household. We met nobody from the outside and no one entered our house. But even then the coronavirus entered our home, and infected one member after the other.

HOW IT ALL BEGAN?

My uncle, a 57 yrs old healthy male was the first patient. He complained of fever, fatigue and bodyache. It was dismissed by us as just a seasonal flu. Over the course of next 3 days, his wife (54 yrs) and son (26 yrs) got sick too, with similar complaints. On the other floors, my father (62 yrs) and my other uncle (60 yrs) also got sick. Things started looking serious now. Even though in our family, it was quite a common occurrence for multiple members to get sick simultaneously, we got increasingly worried and cautious. But we decided to wait for a week, which is how long a flu usually takes to resolve. However we did isolate the patients. As soon as the first symptom appeared, the sick were confined to separate rooms, having limited contact with other members.
Over the next 4 days, my mother (58 yrs) and my grandmother (87 yrs) got fever and bodyache. This was unusual. And we were scared now. It was mutually decided that the patients would have to follow some basic isolation steps:

5 days later, my aunt who was already down with fever complained of breathlessness. When she showed no improvement, we knew it was time to get her tested for Covid-19. With a prescription from our family physician, she was tested at home for Coronavirus. Next evening, as more members were being tested for Covid at home, her report came out to be positive. It all came crashing down after that. The family was aghast and devastated.

HOW DID WE COPE?

Over the next 4 days every adult member was tested and it was found that 11 out of 13 adults were positive for Covid-19. It seemed like the end of the world for us. The lockdown, up until then, had been a very positive time for the family. We had spent all our time together; eating, playing and having fun. This was a jolt so sudden that it shook each of us to the core. But it was also time to act and decide swiftly.
My aunt was shifted to a Covid hospital the same night her result came out. And our house was quarantined with nobody being allowed to enter or leave the building. It was overwhelming for us. And as the results of other members were coming out positive, we all seemed to be sinking fast.

MANAGEMENT OF THE PATIENTS:

Our house had turned itself into a Covid healthcare center. So, we took advice from 4-5 doctors for managing the illness at home. Since there is no treatment yet for the disease, the management is mostly symptomatic, i.e. medicines are given only to relieve particular symptoms, not to cure the underlying disease. Here is a snapshot of the treatment that was advocated, after assimilating all of the advice:

Management of Children: Our topmost concern and worry during this time were our children. I and my wife had tested positive and my 5 yrs old daughter had tested negative. My 22 months old son couldn't be tested. So we were in a very precarious situation. We were scared that we might infect our kids and what we would do if they show any serious symptoms. But we consulted a couple of pediatricians to allay our fears. Based on their suggestions, we concluded that:

Segregation of healthy members: My cousin (29 yrs), his wife (28 yrs) and his 2 kids (2 years and 3 months) were the only apparently healthy members who had tested negative. It was our collective responsibility to prevent them from getting infected. So, they were completely segregated from us in the house and were in a quarantine of their own. They could not be sent anywhere else as even they could potentially cause risk to the people outside the house.

KEY LEARNINGS FOR US:

We had to hospitalize only one family member, who was discharged after having no symptoms for 3 consecutive days and testing negative on 11th day of hospitalization.

My grandmother still has low-grade fever after 26 days and tested positive in her 2nd Covid test, repeated 16 days after her 1st test. She continues to be isolated and managed at home.

Rest all the affected members have recovered and exhibited no symptoms for more than 15 days.

Most of the members have tested negative on their second Covid tests (repeated after 12-14 days of first test), while a few still remain positive and will be tested again after at least 14 days of their 2nd test. Meanwhile they are quarantined at home, and segregated as much as possible from recovered members.

We pray and hope that each one of us will soon recover from this disease completely.

After almost a month of battling with the disease, each member of the house recovered ! Though most of the members' symptoms lasted for 12-15 days, they remained quarantined for almost 15-20 days after recovering. Their quarantine ended after they were tested negative for covid-19.

Looking back it almost seems like a miracle now. But we continue to be cautious and anxious about the road ahead. Since there is no proof yet of a long-lasting immunity in covid patients, we consider ourselves as vulnerable to a re-infection as before. Hence we continue to take as many precautions as possible to stay safe. We were lucky once, which may not be the case again. So precautions are our best weapon right now.

Brief overview of the family: 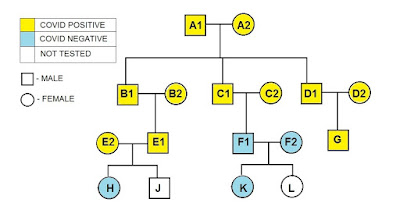 I have written about this whole experience, only with a hope of reaching out to anyone who is undergoing the same situation as our family, and needs some reassurance and support to keep going. This is by no means an advocacy of any particular treatment or advice, since we only did our best to use whatever understanding we could build from various resources, and could have been wrong in many processes and methods.